Philly Sports Daily: Flyers Would be Smart to Part Ways with Carcillo

The future of Dan Carcillo in Philadelphia is up in the air once again.

This time, it should be the latter. But it has nothing to do with his performance.

Looking to bust out of a four-game slump with pure force, the Flyers will activate both Jody Shelley and Dan Carcillo for tonight’s contest against the visiting Edmonton Oilers at the Wells Fargo Center.

Forwards Nik Zherdev and Andreas Nodl will be the healthy scratches.

END_OF_DOCUMENT_TOKEN_TO_BE_REPLACED

The 5-1 rout against the Ottawa Senators on Monday at the Wells Fargo Center, wasn’t without casualty for the red-hot Flyers.

After missing a hit in second period of the then close contest, Flyers’ forward Dan Carcillo dropped to all fours. He was helped off the ice and didn’t return to the game. The team officially called it a lower body injury, with GM Paul Holmgren saying the truculent fourth-liner would miss two weeks with a sprained MCL.

No call ups are expected. However, with James van Riemsdyk filling in for injured Andreas Nodl (toe), the Flyers may have to play down a forward when the team faces the Montreal Canadiens on Tuesday. There is no word yet on if Nodl will dress.

Carcillo has two points and 39 penalty minutes in 14 games this season.

Since being acquired  by the Flyers in 2008-09, the only consistent aspect of truculent forward Dan Carcillo has been his inability to find a niche’. And that hasn’t changed this season. Logging  a time-on-ice average of just 8:25 minutes  for the first four games of the year, along with being scratched entirely in against the Pittsburgh Penguins on Oct. 16, it seems that the answer to where Carcillo fits is coming to a head in Philadelphia.

“I think I’m an NHL player,” Carcillo told the Philadelphia Inquirer. “In my mind, I think I can play and be effective in this lineup. Maybe (Flyers coach) Peter (Laviolette) doesn’t see that. Who knows?”

END_OF_DOCUMENT_TOKEN_TO_BE_REPLACED 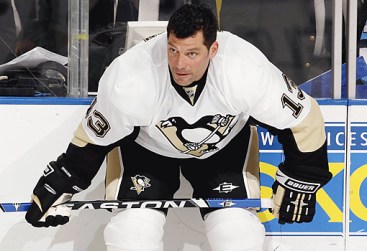 With a number of veteran forwards still dangling precariously in unrestricted free agency, it was guaranteed that many would be invited to try out at training camps around the league.

However, few would have guessed that Bill Guerin would be among them — and that he would seek the Flyers, of all teams, for an audition.

END_OF_DOCUMENT_TOKEN_TO_BE_REPLACED

According to a press release by the organization on Tuesday, the Flyers have officially signed restricted free agent Dan Carcillo to a one-year deal worth just a shade over $1 million ($1.075).  He will remain a RFA after next season.

“We are happy to have Dan under contract for the 2010-11 season,” Holmgren said in the official release.

END_OF_DOCUMENT_TOKEN_TO_BE_REPLACED

In a move that will thrill as much as it bewilders the Flyer faithful — Philadelphia has opened up talks with unrestricted free agent forward Arron Asham.

Asham, 32, has been with the Flyers since the 2008-09 season, but was told that he would not be retained as a UFA by the organization due to money constraints.  However, according to CSN’s John Boruk, the Flyers have had a second thoughts on the gritty veteran.  San Jose, Phoenix and Los Angeles have also been rumored to have interest in Asham.