Emery to use classic Parent-style pads for Winter Classic? 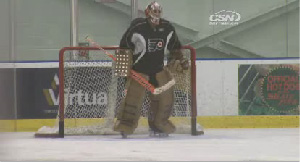 Before the start of the season, it was leaked that Flyers’ goalie Ray Emery would sport a special mask for the Winter Classic game against the Boston Bruins at Fenway Park on New Year’s Day.  The mask will feature the goalies of Flyers past, Ron Hextall, Bernie Parent and Pelle Lindbergh.

But as it seems, that might not be the only new equipment Emery will wear.  Seen in practice wearing classic brown equipment, Emery appeared to be breaking in the new-old duds not seen since Parent and Lindbergh.

No new equipment, other than the mask, has been confirmed.  But that brown seems to be a bit too “classic” to be anything other.

One response to “Emery to use classic Parent-style pads for Winter Classic?”